So the wait begins for our things to arrive from California and in the meantime we are exploring Austin. We had fried pickles for lunch today – which were freakishly delicious. We placed 2 orders. Yum.

And here’s a shot of Rob trying to figure the puzzle that is the moving truck and Kelly who paused to smile for the camera. We hope our things arrive in a couple of days. Our fear is that they will come Monday when I’m not here in Austin (Back in California) and Rob has an interview. Yikes!

And one more shot from the road, although I have to make one more journey so, there may be more. I hope you are doing well. Drop me a line and let me know! Take care!

And, we have Drew, aka Poodle who will be singing songs, telling jokes, cleaning bugs from the windshield and all around merriment provider to keep Rob awake during his turns behind the wheel.

We start out at 8pm after a visit to Rocki and John’s for a final farewell BBQ. What good food and few tears! Which is great because already it has turned into the longest goodbye recorded in human history.

My poor family. I feel so bad that they’ve had to endure, yet one more ‘good bye’. But this time we mean it. At least, until part III but off we go.

We did well for the first 12 hours. Hour 12 brought a melt down of epic proportions. I tumbled from the backseat which I was laying across, onto the floor of the SUV. Not amused, Rob nearly got a egg-mcmuffin across his cheek. But we were back in no time singing showtunes (the only kind Poodle knows) and then we finally reached West Texas. After El Paso it was primarily open open open spaces. There was a tremendous storm though that was so close you could reach out a glass and catch water. It was right next to us and it provided miles of amazement. Rainbows, dark skies and lightening like we’ve not seen before, but all parallel to our path.

We made it and only in the last hour did it appear that we might be plotting each others demise. Even Uno who had been surprisingly happy (happy? well ‘not distressed’) up until now seemed as though he were plotting his leap at our throat once the gate was open.

But we’re recovering now. We’re tired. In fact, I’m writing this just prior to going to bed and can hardly keep my eyes open. But – we’ll catch up with you soon.

In the Distance. Clear.
Originally uploaded by ChristopherSolis.

I’m job searching hanging out at the Texpresso. I’m submitting resumes online and hanging out. Daniel and Eric just walked in (see their pictures on my flickr site. You can click the link on the right).

And, so I’m missing Rob because he is in California. I’ll be there on Wednesday, and am looking forward to seeing some folks spending time with the family and heading out for the next leg of the journey.

When driving in the middle of the night and in the last 100 miles of a journey the flash of a warning light is enough to send a shiver through all the way to the ventricles of your heart.

Especially when trying to dodge roaming deer through the back roads of Texas. Knowing that if something happens at 1 in the morning you’d be absolutely helpless. I mean,how would I even relate to a tow truck where the hell I’m at??

“Go down past three doe’s and then the roadkill skunk. When you pass the abandoned gas station just three miles and you’re there!!”

So, when this light flashed out of the corner of my eye, All I can say is ..

But, thank goodness it was just washer fluid!! Rob and I laughed afterwards. It was no wonder we ran out of washer fluid. Trying to make sure we can see those deer we were using it every two seconds. One thing in Texas sure is bigger.. the BUGS!!

Rob and the Trooper
Originally uploaded by ChristopherSolis.

To those of you who inquired.. what ‘second’ run in with the law?

Sorry, this was our first. Rob just inside Texas and just outside of El Paso. I was sleeping when Rob started to pull over to the side of the freeway which of course just sent me for a loop.

I asked “why are you stopping? Is something wrong with the truck?”

Oh. I guess when they say 80mph maximum, they mean it. Rob was testing 90. Although I thought ‘anyone’ going 90 should get a ticket, our friend Dan in San Francisco is all ‘down with the man’.. and has sided with Rob on this one.

It was not how we hoped to spend our first $200 in Texas, but whateverr.

Another Brush With the Law – This One Good
Originally uploaded by ChristopherSolis.

On the 4th Day of Austin, Our Adventure Brought To Us… la la.. isn’t that how the song goes? This is a picture of a friendly Austin Police officer. This one we were happy to see. The wheel was knocking on Barnett which is a major street, like Watt Avenue in Sacramento.

When I came to a stop, the wheel fell off!! Uh oh. The officer was nice and diverted traffic for us, he also found the only lug nut (the locking one) that was holding the wheel on.

As of this writing the truck is at the Farr Stone (That’s Firestone for you and I) finding out whether the wheel locked up or if someone tried to lift my wheel last night and got discouraged by the wheel lock, or heaven forbid – someone doesn’t like California plates and was trying to send us a ‘go home yankee’ or would that be.. um go home California Yankee.. message.

So until we find out what the story is, we found a ride back to the Hotel Bailey’s and we sit here in air conditioned relief waiting for the next chapter in our adventure.

I hope you’re doing well! We consider ourselves very very grateful. This incident could have happened at highway speed, or even worse, at highway speed on the span between El Paso and San Antonio. If that had been the case, I wouldn’t be sitting here updating my blog, I’d be spraying Polo cologne on myself to repel the coyotes to deter them from considering me food.

At the Very Start
Originally uploaded by ChristopherSolis.

We were on the road. Sunscreen – check. Wallets – check. Checks – check.

We didn’t know how much fun was in store, but we were sure it would be bearable. After hour 20 we weren’t so sure. Now you I know I can get my roadtrip on. Daunting? Never. Scary? Mary please. But that was before we tried to fit two king-sized men into a mid-sized, standard cab, no-console, bench-seat, bouncy truck.

Oh my God. Can we book a stage coach next time? Can we? It would be far better than this. Riding a pogo stick would be less bouncy.

This, was Texas Torture. But, we made it. More to come.

Well we made it! We’re here in Austin now and it is so pretty. It’s overcast and hot and muggy. Although I’m sure there are those in Sacramento who are folding there arms with a HMPHH told you so!

Well. We never argued that it wasn’t going to be muggy miserable. But it’s still nice. We heard the cicadas tonight and everything is so green!

We had dinner with some nice folks this evening and tomorrow we’ll start looking for a place. We’re staying at the Hotel Bailey (our friend Wayne’s) the most gracious place in all of Austin! For more pics, go to Rob’s blog and flickr link.

As for now.. I’m happy to be here even if it wasn’t without incident, since Rob got a ticket. Ouch.

Talk to you soon! 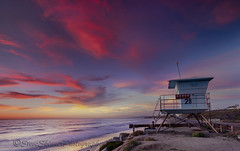 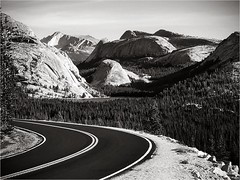 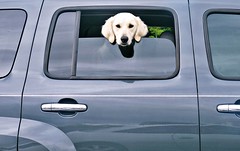