We went to Whole Foods with our friend Justin Miloro and others to make skin care products. I was intrigued because I always thought skin care products were comprised of ingredients I couldn’t pronounce, let alone anything that could be handled in anything but a sterile, full-body-suit, respirator-mask-wearing environment.

Then it occurred to me. Eww. Why would I put anything on my skin or hair that contained such items that I didn’t know what they even were. I always look at labels when I push my cart up and down the aisle of the grocery store. I’d like to at least be aware of what I’m putting in my body. Granted, I don’t always make the best choices, or sometimes there’s a trade off. This many calories over here, cut back on some over here.

But, what actually goes into the things I put on my body?

The great thing about this day’s events was that I not only learned what can go on my body, but how surprisingly (refreshingly) simple the ingredients can be. We spent the afternoon with the owners of the company and some of our friends, and with mixing bowls and gloves (gloves for the goopy factor, not for the caustic protection factor) we mixed ingredients as simple as brown sugar, orange essence, salt, lavender oils, jojoba butter among others.

Not only was it educational to see what the products are made of, it was fun and very endearing on a personal level. At the end we placed our labels on our products that we created. Not before taking a spoon and tasting our concoctions. I never would think to open a bottle of Acme scrub at home and plop a spoon in for a sample.

The best part is now that I know what goes into the products I pass by the Whole Foods, first-hand, I can purchase with much more confidence. After all, I’ve actually made these products before.

I look forward to visiting the Hugo Naturals headquarters the next time I visit my friend Justin in California. In the meantime, while I’m soaking in my tub and I reach for my brown sugar face polish, I feel reassured (and just a little proud), after all, I “made” that.

There are new advocates proclaiming that the Gastric Lap-Band surgery be made available to more people. I think that’s great. There is a caveat however. This really has to be made in conjunction with education. Education about the Lap-band and what its pitfalls are is just as important.

I’ve had tremendous success with the surgery. Speaking strictly from a results perspective, it’s been an A+. What’s important however is to take in the whole picture. It’s not been without drawbacks and challenges. Some of them even have hazardous consequences. So, the concern on my part is that people, who otherwise don’t have access to all the information wouldn’t know that it’s not a simple as it is sometimes presented.

It certainly was presented to me as simpler than it turned out to be.

For example. I was assured that it would only be essentially an outpatient procedure. I could check in the morning, and be out by the afternoon. To be sure, I was informed it was surgery but because of its “non-invasive” nature, requiring an incision to install it, but not any cutting inside – that I could be out the same day. In fact, the receptionist who greeted me at the clinic on a Thursday informed me she’d had the procedure on Monday and was already back at work.

All that bodes well. However, as with many things, not all people respond the same way. It’s sometimes harder for some to recover than others. My recovery for example, was more like two weeks. I was substantially bruised, bloated and sore. It hurt to move and I didn’t feel like moving even if I could with an overall “gassy” and full feeling. All a result of surgery.

There’s an emotional component that accompanies it. There was a slight depression from laying around the house for a couple of weeks. That was compounded by the realization that after all that I wasn’t losing weight right away. The band is installed without any saline in it. And, it’s not added for about a month after surgery recovery. So, the high expectations I had were dashed when a month after the surgery I’d barely lost much weight at all.

Once the saline was added however the results were dramatic – two pounds a week in some instances. But here too, I had a difficult time moderating my eating. This resulted in a lot of regurgitation. Not really throwing up so much as just unswallowing. This made it difficult to discern when I really got ill which occurred about a year after the surgery. I had over eaten perhaps, over a period. The result was an expanded esophagus. The symptoms were grave. I was turning white because my blood pressure dropped to dangerously low levels. I felt weak. I hadn’t had a bowel movement in forever. I was dehydrated as nothing was entering my stomach, even water. All this resulted in a complete removal of the saline a rebound of gaining 40 pounds of the 130 I had lost.

Incrementally, I reintroduced the saline. While never returning the fill level I had prior to the complications I still have returned to a state of an inflamed esophagus. The saline again has been greatly reduced and I’m currently on liquids until my next appointment. All this presents a dangerous condition because food that is allowed to remain in your esophagus, which is not a part of your body which is set up to break down food, like a stomach – will essentially rot, provide you with a lethal infection with bad consequences.

So, it would appear that my relationship with food itself has not been resolved. It will be an ongoing challenge that the Lap Band is a tool to assist with. But, it’s not a solution only part of one. I hope that those who offered this – really comprehend that part of the procedure.

Well, I lost more weight this week. Now, it’s 246 from a start of 280. So, slowly but surely. We had our Idol weekend last Saturday. Where I sang (or attempted to, no really – attempted) and Eric played the piano. He did such a good job! I wish I’d practiced more because he worked so hard and when the lights hit me it was like that episode of when Cindy Brady goes on TV. I was all .. what? duh.

Eric was so sweet and played a few extra stanzas until I could remember what the damn words were! It was horrible and we didn’t make it even into the top 7. Sorry Eric! I’ll try harder next time! If there ever is one.

We worked to clean up the hall on Sunday as we have been for a few weeks now. And, Friday was Eric’s pool party. His family came to visit from West Virginia so we were over at Janis’ playing the Wii and having a great time.

I hope you’re doing well! If you haven’t checked out facebook lately, I’ve been uploading pictures and stuff – so check it out at facebook.com 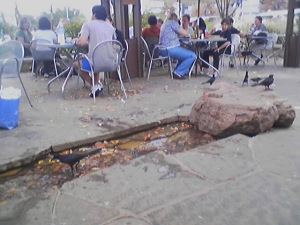